Capn Doug's Tiare, The Red Boat, with his wife Sherry at the helm 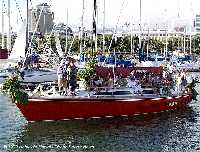 Tiare on the far right, her red battle flag at half-mast, with Golden Marlin up front
Capn Doug was also a surfer and he paid this webgeek one of the best compliments ever
for a set pix eye snapped on the day The Eddie went ... 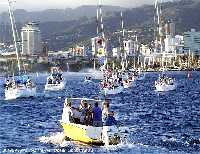